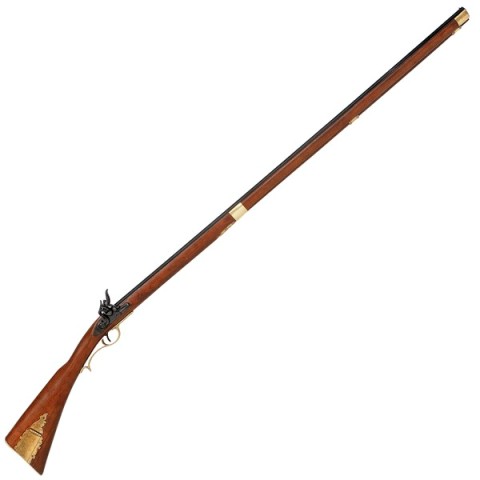 148 cm long. At last a comparable length musket with a decent lock.

Relics offer this Kentucky style Musket that will look wonderful over your fireplace. A sure fire reproduction that will keep them Bears at bay during those long winter nights when your snowed in your log cabin. Pretty good against the Mexicans as well.

Death at the Alamo

In 1835 Crockett and four neighbours headed into Texas looking for new land. By January 1836 he had joined the Texas Volunteers, and within a month he reached San Antonio, Texas. Crockett then joined Texans in their fight to hold the Alamo against a Mexican army. In the first week of March he and the other defenders of the Alamo died during the siege and capture of that fort by Mexican troops. Popular tradition says that Crockett was one of the last defenders who died during the final assault. In reality, Crockett was one of the first defenders to die—alone and disarmed, on March 6, 1836.

Please note due to scanning machines and customs restrictions Model Guns are difficult to Air Mail outside of Europe. We send them by alterative specialist carriers which is now unfortunately expensive.

UK CUSTOMERS Due to the length shipping is expensive. If you are a UK resident living  offshore of the Mainland ie Northern Ireland, The Channel isles, The Isle of Man, Isle of Wight etc Please select your area from the drop down menu to see the current shipping rate for your order.