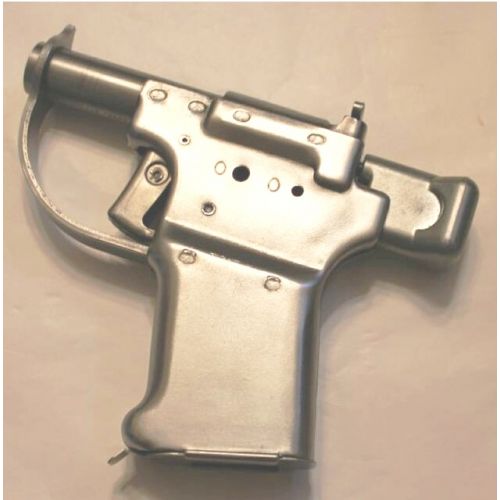 Produced for the US Army / OSS, the F-45 OSS/SOE Liberator Pistol was designed in 1942 by the Inland Guide Lamp Manufacturing Division of the General Motors Corporation in Dayton, Ohio. It was a crude, single-shot pistol designed to be cheaply and quickly mass produced, having just 23 largely stamped and turned steel parts that were cheap and easy to manufacture. It fired a .45 calibre pistol cartridge from an unrifled barrel. Due to the unrifled barrel, maximum effective range was only about 25 feet (less than 8 m). The Liberator was shipped in a cardboard box with 10 rounds of .45 ACP ammunition, a wooden dowel to remove the empty shell casing, and an instruction sheet in comic strip form showing how to load and fire the weapon. Extra rounds of ammunition could be stored in the pistol grip.

The Liberator was intended as an insurgency weapon to be mass dropped behind enemy lines to resistance fighters in occupied territory. It was valued as much for its psychological warfare effect as its actual field performance, and it was believed that if vast quantities of these weapons could be delivered into Axis occupied territory, it would have a devastating effect on the morale of occupying troops. The plan was to drop the weapon in such great quantities that occupying forces could never capture or recover all the weapons. It was hoped that the thought of thousands of these unrecovered weapons potentially in the hands of the citizens of occupied countries would have a deleterious effect on enemy morale.`In reality, the OSS never realised the objective of mass dropping the Liberator over occupied Europe, and only a handful were ever distributed, usually via Harrington the ` Carpetbaggers ` airfield and base in Northamptonshire. There was also some limited distribution in the Far East most however, were scrapped or dumped in the Atlantic.

Our replica is a solid remider of those desperate actions by partisan heros fighting against all the odds with little help or support from anyone.

Made from resin its fulll size and extremely realistic.