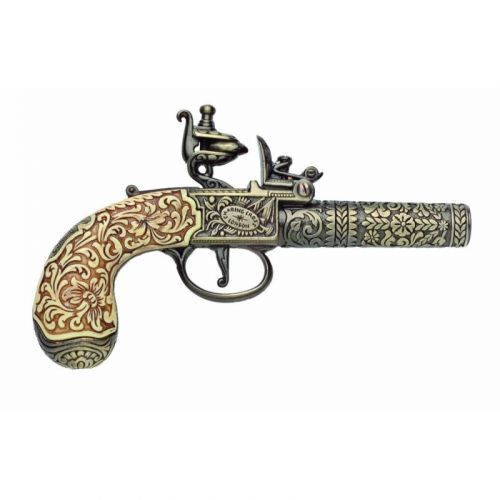 In 1790 Knubley was awarded the title of Gunmaker to the Prince of Wales, the Duke of Clarence and Prince Edward.

Between 1786-1797 English pistols were often  decorated in Eastern manner or "Turkish Taste". This opulent and lavish style was generally intended for Eastern Europe, Turkey, North Africa and the Middle East, but also seemed to satisfy the fashion for oriental artifacts that had developed in Western Europe. In London, the fashion at the time was described as "Turkish ornaments in the newest taste".

In addition to the curvy angle of the butt, this style rather copying oriental patterns uses traditional European motifs such as trophies of arms, running foliate scrolls, flowers, and martial figures in an opulent and massive style more reminiscent of Eastern Europen taste which is typically found on Bohemian guns. In early 18th century English gunmaking it has been referred to as the "cinoiserie" syle of decoration.

This opulent non-firing replica is reminiscent of pistols produced at Charing Cross by Knubley and Brunn between 1795-1797. In a "Belgian" design motive, this pocket flintlock has an intricately engraved filigree design metal barrel, antique finish and faux ivory grips.